How Many Lightning Strikes?

How many Lightning Strikes does Africa receive every year?

Lightning detection professionals use the term 'stroke' instead of 'strike'. Stroke density is defined as the number of strokes per area per year. It is higher in tropical and subtropical areas than in temperate climates, bringing higher exposure to lightning injury, particularly to those in labor-intensive outdoor work like farming and shepherding and to those who have little or no access to safe structures where they could avoid lightning danger.

Stroke density is used in risk calculation of lightning injury or damage to determine the lightning protection level required. New technology is allowing us to pinpoint areas of high stroke density across Africa to direct where prevention efforts can be maximized. 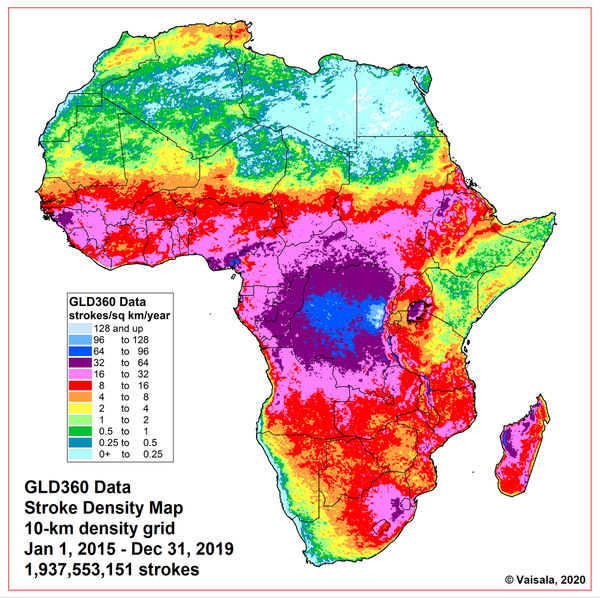 Lightning detection data comes from many sources: land based systems, satellites, and many others. A new technology is Vaisala’s Global Lightning Dataset network, GLD360, which covers the entire world, including oceans (classic ground based detection systems do not cover water well), and is not satellite dependent. Using GLD360 data, the Ndata School of Climate and Earth Sciences of the Malawi University of Science and Technology (MUST) prepared maps of lightning activity over Uganda and other countries in East and Central Africa that was used in a poster at the Annual Meeting of the American Meteorological Society in January 2019, which can be downloaded: 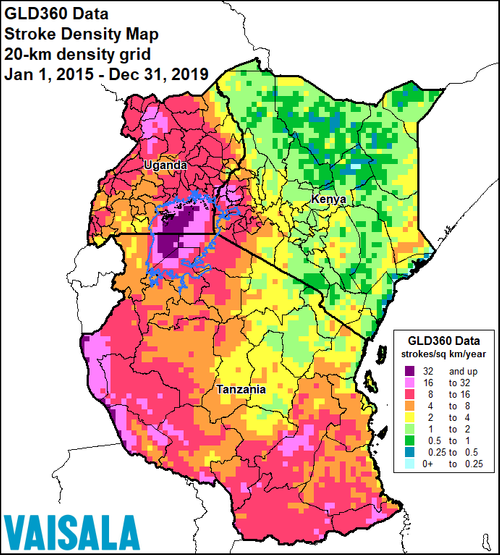 Lake Victoria, bordered by Uganda, Tanzania and Kenya, is large enough to generate its own weather patterns which include increased lightning and risk to those who live around these large lakes.

This GLD360 lightning stroke density map over Tanzania, Kenya and Uganda was updated from one generated by Vaisala for Richard Tushemereirwe and Mary Ann Cooper's visits to government Ministries in Uganda in early 2017 that served as an essential resource for orienting Ministry officials about lightning injury risk. It was also shared with members of the Kenya National Academy of Sciences at a 2019 meeting where preventing lightning deaths in Kenya was discussed.